They have been called “Hoverboards“, Segways and by the definition of the Metropolitan Police of the UK, “Self-Balancing Scooters“.
They have become popular overnight, worldwide, these boards have have found their way on side streets, parks, playgrounds, malls and even airports!
The surge of these boards are partially due to their affordability, convenience and what so may say, a satisfaction of a past fantasy. Let’s face it , it was 26years ago “Doc” Dr. Emmett Brown (Christoper Lloyd) promised us one! Him and Marty McFly (Michael J. Fox), in the movie Back To The Future II, traveled to the “Future” of “October, 21, 2015”, where the “Hoverboard” existed! It would seem as if it was prophesized.

This all means nothing to the MPS who have just announced that the “Self-Balancing Scooter” is illegal to ride in public in the UK. 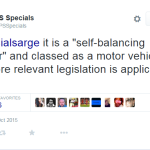 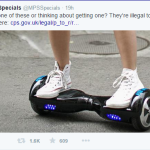 This has also been a discussion with the MPS on Twitter in real-time as well. Their justification for this lies within the lines of the Highway Act 1835, under section 72.

The Crown Prosecution Service have supported that “it is against the law to ride them on any public road, including the pavement, and that they should only be used on private land.” This is the language written under section 72 of the Highway Act 1835.

The MPS have also provided, through their Twitter, the CPS, FAQ:

Clearly this encroachment upon the people does not create a warm relationship between the police and it’s community. It seems to be the “modus operandi” of the police and government, another action to seize control and in their words…MONEY! Not once has the mention of safety been an issue, but the MPS did “tweet”, “It’s because they’re technically motor vehicles & therefore have to be registered, licensed & insured to ride on public roads.“

So in true “Big Brother” fashion, like a game of chess…The police and the UK government have made their move.
It will be interesting to see what leads from this ban and the impact it will have on the sale and cost of these “Hoverboards”.
So if you are in the UK and own one…remember walk…don’t ride!