At the most recent G20 gathering in Antalya, Turkey – Russian President Vladimir Putin announced that he had shared intelligence with the other G20 member states. The intelligence revealed the 40 countries from which ISIS finances the majority of their terrorist activities. The list reportedly included a number of G20 countries. Putin, in many ways placed all members on notice. An act that should raise many questions. Such as; who is ISIS really? Who are the purchasers of this “Blood Oil“? Is this why there were limits on oil trade, which kept prices high?

Putin continued his address discussing how imperative it is to cease the funding to ISIS, lamenting on ending ISIS illegal oil trade.

“I provided examples based on our data on the financing of different Islamic State (IS, formerly ISIS/ISIL) units by private individuals. This money, as we have established, comes from 40 countries and, there are some of the G20 members among them,” explained Putin

“I’ve shown our colleagues photos taken from space and from aircraft which clearly demonstrate the scale of the illegal trade in oil and petroleum products,” he said.
“The motorcade of refueling vehicles stretched for dozens of kilometers, so that from a height of 4,000 to 5,000 meters they stretch beyond the horizon,” Putin shares.

“Some armed opposition groups consider it possible to begin active operations against IS with Russia’s support. And we are ready to provide such support from the air. If it happens it could become a good basis for the subsequent work on a political settlement,” says Putin.
“We really need support from the US, European nations, Saudi Arabia, Turkey, Iran,” the Russian president added.

It is said that if you want to know who is in control, “Follow the money“. Putin believed it is impossible to defeat #ISIS without cutting its financing. This was the focus at the #G20 Summit. So when one follows the money one trail leads to the Islamic State, which benefits from an estimated $50 million a month from selling crude from captured oilfields in Iraq and Syria. These findings are based on Iraqi intelligence and U.S. officials.

So who is ISIS?

On July, 20th 1990, C-SPAN aired an interview  with Brian Lamb, Dan Raviv and Yossi Melman, authors of the book “Every Spy A Prince“: The Complete History of Israel’s Intelligence Community. The book, based on one of Israel’s decorated spies who helped Israel win the six day War with Syria in 1967, describes how the Israeli Prime Minister’s Office officially refers to its subordinate organization “The Mossad” as the “Israeli Secret Intelligence Service,” or ISIS.

Israel has 3 major Intelligence Organizations. The first being the Mossad (in Hebrew it means Institute), it is their Foreign Espionage Arm, which would be comparable to the CIA. Then there is Aman, this is Israel’s Commanders of Military Intelligence. Aman would be the largest of Israel’s intelligence groups and considered the most important. Lastly; there is Shin Bet (Security Services), this is Israel’s domestic agency and would be comparable to the FBI. Out of the three agencies, Aman would be the most important. Some of their responsibilities are to survey their neighboring Arab Nations, gathering intelligence on their movements and armament. To sum, Aman would be one of the layers of defense to thwart and alert Israel of potential threats including war.

How important is Mossad, with such great responsibilities on the shoulders of Aman? Aman is overshadowed by the Mossad. This makes Mossad the second most important agency in Israel. It would seem as if they work co-dependently. If compared to the United State’s agencies, Aman would function similarly to the NSA and Mossad would be the CIA. Not to forget Shin Bet, the “ears on the concrete”. They work on terrorism prevention, political espionage and counter-terrorism on a domestic level.

When communicating with other Government Intelligence Agencies, according to the Israeli Prime Minister’s Office, they identify themselves as the “Israeli Secret Intelligence Service,” or ISIS.

Fast forward to today, and the US Government affirms that ISIS is an Islamic Terrorist group. Putin, at the G20 Summit in Turkey, declared that “ISIS is being funded by 40 countries”! 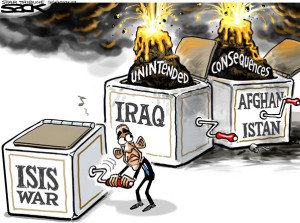 This would not be the first time agencies such as the CIA have had their hands in shaping, and training groups that would later be revealed as the next Terror Group; Al Qaeda, “an instrument of terror designed to divide and conquer the oil-rich Middle East and to counter Iran’s growing influence in the region.”

We encourage people to ask the right questions. Concerned one should be, when the narrative is always the same.